Stockholm: The End of the Road

We arrived in Stockholm knowing a few things about our visit, it would be our final stop on our month long ramble through Europe, and that we would be staying in a dungeon.

If you have taken a lengthy trip the end of the road is a mixture of relief and regret. Home suddenly becomes a reality and thoughts of sleeping in a bed that you know and showering in a place that isn’t a confusing combination of dials and plungers makes a traveler think about never leaving home again. But, I spend most of my time thinking about what I didn’t do…I didn’t get to the baths in Budapest, I only saw one outdoor opera in Vienna, I only had 2.5 days in Amsterdam, I missed a bunch of stuff in Copenhagen, I should have gone to that discounted classical music event in the palace in Prague, and I never found that hip area of Oslo where food isn’t expensive. (I don’t think this place exists. It must be a vast left wing conspiracy of mapmakers, travel guide writers, and the Internet.)

Missing stuff bothered me on my first couple trips because I assumed I would not be back, but I don’t think like that any longer. Travel is a priority and I will figure out a way to get back to the places I missed.

And so we arrived in Stockholm ready to bring our trip to an end. The hotel I selected met my requirements: Inexpensive (for Stockholm), near a metro stop or centrally located, good reviews on TripAdvisor, and a breakfast buffet included in the cost. The pictures of the hotel let me know we were in for something unique…all of the inexpensive rooms shared a shower and toilet, and looked like Poe visited them before writing Cask of Amontillado. (If you don’t remember this story from your 9th grade year in high school it’s the one where the guy traps Fortunato in a wine cellar.)

We passed through the passport check, caught the fancy fast train to the city center, got on the right metro train going the wrong direction, got off the right metro train and went the right direction, and found the hotel without making any mistakes (going the wrong way on an unfamiliar metro line doesn’t count as a mistake)…we were getting better at this. The hotel was small, the rooms were Hobbit like, and the bathroom was something else.

We unpacked a little and then went in search of something to eat. We ended up walking through the old town (Gamla Stan), getting a little lost (which is key when looking for a good restaurant in my opinion), and then eating at a traditional Swedish restaurant. After being in Munich, Bratislava, Budapest, and Prague for a couple weeks it was good to see that fresh vegetables were still being served in Europe. 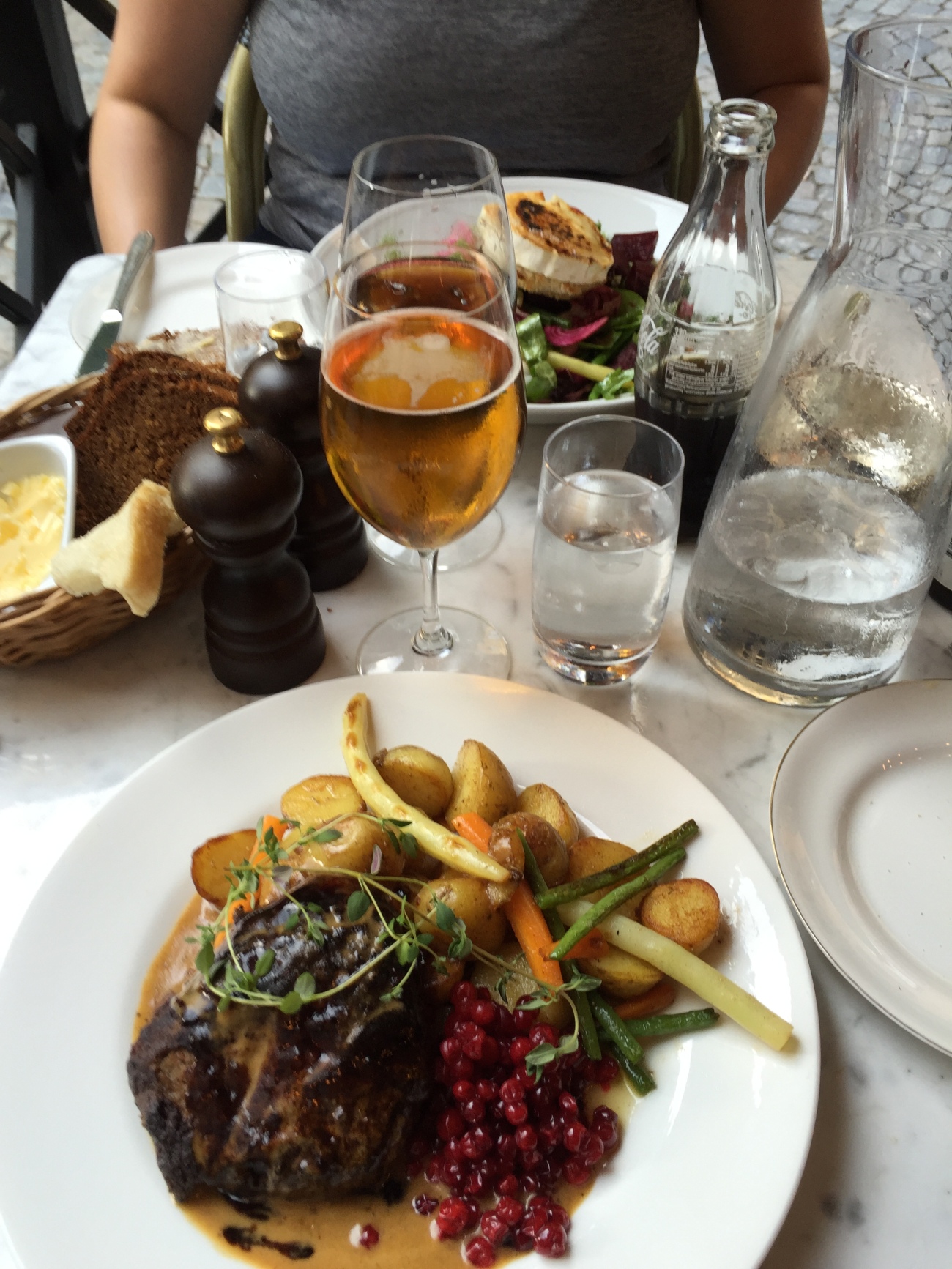 During dinner, I laid out the plan for Stockholm, take one of those Hop-On Hop-Off double-decker bus tours that I make fun of, and then pick a couple things to do. In other words, take it easy and see a few things instead of trying to race through everything.

The next day I was on a red double-decker bus, earbuds in my head listening to the English version of Welcome To Stockholm. It was the least informative tour I have ever done in my life. Stockholm is an old city. The age of a place usually makes it more interesting because there are layers of history everywhere you go. Stockholm is either the most boring European capital in the world, or the Hop-on Hop-off Bus tour is letting Kansas’ State Board of Education write their history. (I realize I deserve to get ripped off by getting on one of these rolling tourist traps. Give me the route and in one day I’ll have put together a more interesting recording. I’ll even do it in Spanish…okay, that’s a stretch.) Here’s my favorite part, “Greta Garbo was born in this neighborhood. Her mother worked in a jam factory and her father sat in a corner and read the newspaper. Garbo hated the long winter nights in Stockholm. She couldn’t wait to leave…” Umm, okay…this sounds like somebody is reading her Wikipedia page https://en.wikipedia.org/wiki/Greta_Garbo . (For the record, I wrote what I remembered before looking at the Wikipedia page.) I believe the people selling the tour of Stockholm outsourced the audio recording to somebody in Mumbai who read a script from the Stockholm Wikipedia page.

Just when I thought the tour couldn’t get worse, the Spanish lady sitting in front of us, on a very crowded bus, decided it was time to air out the old arm pits. It was sunny, it was a little warm, but it wasn’t the kind of hot where you expect people to smell like onion covered hot dogs. Sometimes I exaggerate in my blog…I’m not exaggerating here. It was like someone opened a bag of hot garbage from Nathan’s Famous Hot Dog Stand in the seat in front of me and I was trapped and had to smell it like I was being olfactorily-punished Clockwork Orange style. I did a little mouth breathing and tried to escape but after three minutes I was hyperventilating and she was winning. I gave up. I sat there in misery listening to the recorded tour sprinkle educational gems every five minutes like, “This is the neighborhood where Per Gessle lives,” and “The Abba Museum opens at 10 am,” and “The Stockholm marathon is ranked the best in the world.” Eventually the fates intervened and killed our bus. We pulled over at one of the hop-on hop-off spots and stayed there, nothing was happening so I assumed the tour was progressing normally, but after five minutes some guy came upstairs and said the bus was broken and we would have to get on another bus. We got off, climbed onto the next bus as far from the Spanish woman as possible and traveled for about two more stops before we hopped off for good. I have never burned a $50 bill, but that tour was as close as I hope I ever come. I went on a hop-on hop-off tour of London about 15 years ago and it was 20,000 times better. There was a live tour guide and he had lots of things to tell us. It felt like a really complicated Jungle Boat Cruise but at least when it was over I felt like I knew more about London than when I first got on the bus. The Stockholm version sucked reindeer meatballs (which are very tasty when paired with Lingonberries and gravy) and I still don’t believe that Roxette had four number one singles in the US.

After the tour, my wife and I wandered around for a little bit and headed to the Vasa Museum. My wife wasn’t too thrilled about another Scandinavian boat museum, we had been to three of them in Oslo and those were okay but I wouldn’t go back to any of them again. The Vasa, on the other hand, is one of the best museums I have ever visited. The Vasa was a warship built around 1600. The king wanted two levels of cannons and lots of fancy carvings for his boat. In technical terms this made the boat “tippy.” The king wasn’t a master boat builder, or an engineer, or a naval architect, or anything else that makes one qualified to build a ship, but he was the king, and so his boat was built. The boat sailed for about one kilometer before a gust of wind blew it over and it sank in Stockholm’s harbor. 50 people died onboard. The king’s fancy boat couldn’t be recovered in 1600 because America hadn’t been invented yet and we couldn’t come to the rescue, and so, it sat on the bottom of the harbor until 1959 when some pipe smoking Swedish guy decided it was time to locate it and see if they could get it back above the water. It took about 30 years to get the whole thing done, but now the Vasa is sitting in a big, dark building all recovered and lovely. If the king’s boat had actually worked it certainly wouldn’t have survived 300 years like the Vasa did. 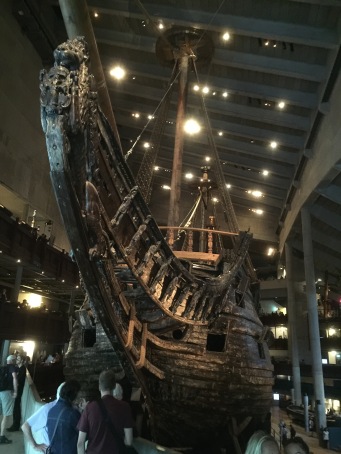 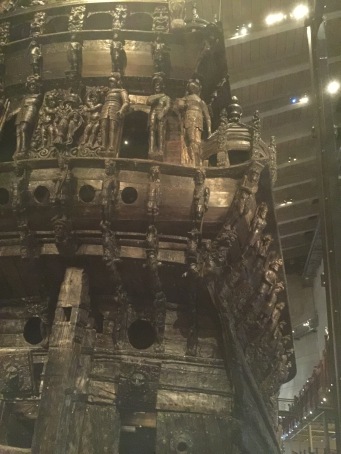 The great thing about the museum is the detail. They could have made a pretty boring museum by digging up the boat and saying, “Ta Da!” and people would still visit because it is an amazing structure, but I learned a ton about boats, boat building, stupid kings, rescuing boats, Swedish history (apparently they have done more than make gummy fish and release the plague known as ABBA on the world), what a diving bell is, how to fire a cannon, and how life in 1600 was not better than today. I also watched a movie on the rescue effort in Chinese (there were English subtitles) that was better than anything on the Hop-on Hop-off tour. (I was about to leave the Vasa museum but it was raining like mad outside, so I went back in and watched the Chinese movie.)

So, for those of you heading to Stockholm here’s a quick list: