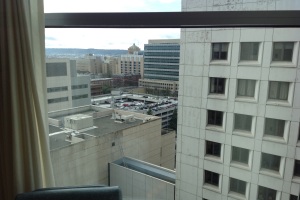 It’s 6 AM and I am sitting in the same squeaky chair in room 1266 that I have blogged from for the past two and a half weeks. I have a routine: Wake up, walk down the hall, make a pot of coffee, get my iPad set up next to the window so I can see the sunrise on Rainier, and write about how things are going. Yesterday was a day filled with mini-meetings preparing to send us home and then…well, here I am. Most of Dylan’s counts have come up but we aren’t going anywhere until one of his counts rise to 500. Yesterday they were at 60. The day before they were at 20. At this rate we’ll be home by July. (I don’t remember which count we are waiting on because everything has turned into a Kafka short story where two people are trapped in a hospital.) He is nuetrapenic which means his immune system can’t fight off the weakest of germs. At 500, he should be able to tolerate being in the real world. Not the real world with germy little kids, but the real world where he can sleep in his bed and everyone in the house puts hand-sanitizer on every three minutes. He has not been off the 12th floor in two weeks.

How long have we been here? I am allowed to get my shower towels out of the Staff Only room, almost all the patients in the neighboring rooms have left and a new group of cancer patients have arrived, nurses who have been on vacation for a week see Dylan and say, “Wow, you look great” and our walking laps are spent talking to staff who know us both by first name.

Some good things have happened in the past two days: Dylan’s weight has stopped falling like the pressure in a New England Patriot football, Amy brought us another round of amazing food from Assaggio Ristorante, I found out how to get to Top Pot Donuts without getting lost, Dylan had a great visit from the Art Therapist, and we continue to find out we have some amazing friends/acquaintances/family. Dylan also met a patient with the same form of Non-Hodgkins Lymphoma he has who is now on his third round of chemo. Dylan was able to ask lots of questions about what was in store for his future and the two of them shared their diagnosis stories. The lesson to be learned was that if some part of your body starts to swell, get it checked out.

The worst part of the last two days is that his sore throat has come back like The Expendables 2 and 3. (Tag Line: Nobody wanted it to happen, but it happened anyway.) The sore throat has him feeling like we will not ever get released, but to be honest, I would rather have him here while he is having the throat issues simply because they know how to treat this side-effect better than I do. (My treatment for a sore throat is a lecture about eating right and gargling with salt water. Neither of those treatments work well because Dylan has heard the lecture before and he won’t gargle.)

One of the final bars to clear before being released is learning how to give Dylan a shot in his belly. I learned a few things about giving someone a shot in the belly while watching a video on self-injection: 1.The entertainment value of self-injection videos is pretty low. 2. Making fun of the video does not make the person who will be getting the shot feel any better. 3. My son doesn’t want me giving him a shot if I can’t be more serious. 4. There are a number of people in my family who are more trusted to give a daily shot than me.

All indicators point toward being home soon, but this is a long journey. We still have at least three more of these stays ahead. They might be easier, but they could be more difficult. Some people say the first round is the most difficult because that is when the tumors are the largest, other people say the second round is worse because they up the dosage on the chemo. We will see. Every patient reacts differently and if there is one lesson I have learned it is to be here now and not worry too much about what is ahead. When life knocks you down and kicks you in the teeth, the future is an hour ahead not a month away. I will probably need to be reminded of this once we are out of the woods, but instead of Thanking God It’s Friday I’m thankful that my son is here today.