Is this Hope, or Another Dead End?

By Monday, eight days into our journey, I had hoped Dylan’s distended belly would stop growing, but it hadn’t. Each hour it seemed to expand beyond what was humanly possible. Nine months pregnant is one way to describe it, but I remembered a term from my research on the Lost Generation that people used to describe gentleman who had distended bellies from drinking too much, they called it German Goiter and I suppose that is the best way to say my son’s stomach had filled up and looked likely to burst. The chemo had attacked what was growing in his belly, but now his kidneys were unable to push all the poisonous fluids out. So in the morning we were scheduled for another drainage of his stomach cavity. By the time we were wheeled down to the ultrasound rooms it was nearly two in the afternoon and Dylan managed his misery by refusing to eat and grumbling about his discomfort. The Sonogram Tech was the same lady from the first drainage and she was very friendly and got us set up for the procedure. The doctor arrived, spent a little time scoping out the best spot to puncture Dylan, and then numbed/punctured/and began draining as if he had ordered a pizza that was about to arrive and he wanted the first slice. The fluid began to flow slowly out of Dylan’s right side and into the pressurized liter bottle. I had expected the fluid to roar out of him like a firehose, but it came out looking like an 80 year-old man’s urine stream. The doctor thought it was flowing pretty good and left the room. Twenty minutes later the flow was dribbling and the liter bottle was only half full. The Tech called the doctor, who returned smelling like fresh garlic and moved the catheter around a bit until he found a spot where more fluid was available. I joked to Dylan that this fluid was more of an Amber Ale color as opposed to the first two rounds which looked like Heifewizen. This joke did not make Dylan happy and in honesty the joke was made because I noticed the change in color and didn’t know if that was good or bad. Did a darker fluid mean things were dying, or did it mean that the cancer cells were winning? Doctor Garlic wasn’t around long enough to ask, because once he found more liquid he left the room again. It took a long time for the first liter to fill and by the time the second liter was started I had genuinely begun to worry that the size of Dylan’s stomach had more to do with tumor growth than it did with fluid. Another twenty minutes passed before the Tech called the doctor in to see if there was anything left in my son’s belly. There was barely a liter and a half collected and his belly had only shrunk to eight months pregnant. The doctor fiddled around for a bit and then hit the motherload. Suddenly the amber goo was shooting out of my son’s side like Old Faithful. It was blasting out so fast that the liquid in the liter bottle had a good-sized foam head on it. The second liter filled, then the third, then the fourth, and then a fifth. Dylan’s belly went from eight months pregnant to I think I missed my period in ten minutes 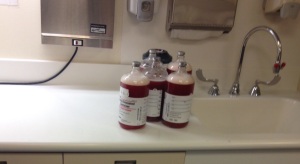 Doctor Garlic patted himself on the back and we headed back up to the room where Dylan was told that tonight’s chemo was going to go on for four hours. We talked about what he wanted to do while the process was taking place. The drug he was going to be given was one that was notorious for bad reactions. So the nurses were going to check on him every half hour and up the dosage if he was tolerating it. Dylan said I could pick the poem to read and he wanted to listen to Mac Demarco on the mini-stereo I brought from home. I decided that Allan Ginsberg’s poem America was the ticket for me, a poem of defiance as opposed to one that would turn me into a sobbing mess.

It was a long and difficult night. We ran out of Mac Demarco to listen to and switched to Radiohead as the night went along. The treatment was painful, Dylan spiked a fever, and his entire body ached. He wouldn’t eat or drink anything but by two AM we were done and his nurse, Jean Rose, socked him full of powerful meds that knocked him out.

When he woke up in the morning he wanted to eat something. He ordered eggs, bacon, sausage and potatoes. He ate it all, well almost all of it, the hospital sausages are the fancy apple-sage sausages that don’t taste near as good as a regular old salt and pork sausage. When he finished his breakfast he had transformed into the kid I had known two months ago.

“You know what I want? I want fries from Dick’s Burgers.” Dick’s is a Seattle chain known for heart disease and cheap, greasy food. I wasn’t sure if Dick’s fries would be allowed, but I thought I would ask.

Since Dylan had eaten so little in the past three days, I think our nurse, Kelly, was ready to feed him anything he would eat. She okayed the eating of Dick’s fries and I got ready for my first big adventure. It was about a 20 minute walk from Swedish to Dick’s and if I took a one block detour I would end up at Elliot Bay Bookstore where I could pick up something for myself. I put on my shoes, grabbed my rain jacket and was about to leave when Joanna, the Nurse Practitioner who was overseeing Dylan’s treatment came in to give us an update. She said all of his numbers had improved and THERE WERE NO CANCER CELLS IN THE SPINAL FLUID they had tested.

My German heritage did not allow me to fall on the floor and begin crying for joy, but inside there was a little German man laying on my heart shedding tears of joy. On the first night the doctors had mentioned the possibility of the cancer spreading to his spine and then brain. It doesn’t take a ________ _____________ to know how deadly that could be, so I was hugely relieved. Dylan would still need shots of chemo into his spinal column but there would be fewer of them which made all of us happy, how quickly perspectives change, a week earlier if I had been told that my son was going to require shots of chemo into his spine I probably would have shouted, “A plague on both your houses,” but today I was ready to celebrate.

I left the hospital with a little hop in my step and called my wife and mom to let them know the good news. My mom, who has Dutch roots, is a big crybaby. When she heard the news she turned on the waterworks to the point where I was walking down Broadway crying myself as I talked to her. I made it to Elliot Bay Bookstore without being placed in a straight-jacket, actually if there is any place in Seattle to cry openly Broadway is probably the best place, there are plenty of weirdos up here on Capitol Hill. I found the book I wanted, Ten Years in the Tub by Nick Hornby, and made a quick getaway and headed toward Dick’s.

Dick’s menu has not changed since the Mesozoic Period, four types of burgers, fries, milk shakes, soda and that is about it. If you want ketchup, onions, or tartar it costs five cents extra. I walked up to the ordering window, “Can I get two orders of fries, and could you wrap them in tinfoil so they don’t get cold?”

“We don’t have tinfoil,” the cashier lied.
“Could you wrap them in one of those tinfoil burger wrappers?”
“No, we don’t do that.”
Now, here is where I wanted to bust out the cancer card as in, “These fries are for my son who is down there in Swedish with cancer. Do you think you could wrap some damn fries for my son who has CANCER and wants to eat your f——- terrible fries!” But instead, I said, “Okay, I’ll take a Deluxe and I’ll wrap the fries myself.” I handed over the money, picked up my order, unwrapped the burger, ate it in four bites, and wrapped my son’s fries in the tinfoil Deluxe wrapper.

When I got back to the hospital the fries were still warm and my son ate them all, I’m sure if he lives to be eighty those fries will have taken two years off his life, but Carpe Diem damn it.

When he finished his fries Dylan said, “I’m ready for my haircut, but first I want you to watch some YouTube videos about giving a mohawk.”

My son has wanted a mohawk since 7th grade and we (his parents) have kinda put the kibosh on the mohawk talk, but now that Dylan was a few weeks from being bald and wanted to get a specific warrior mohawk, I was all in. We set up and I got out the clippers I brought from home and within twenty minutes Dylan became the envy of everyone on the cancer floor.

The evening came and Dylan began complaining of a sore throat. This was to be expected. Chemo messes up lots of body systems and one of the worst side-effects is what happens in the mouth and throat. By midnight we were filling him with Oxy to dull the pain and what had been a great day had suddenly turned into a terrible night.

Cancer isn’t really a roller-coaster, it’s more like an ocean voyage with no land in sight.