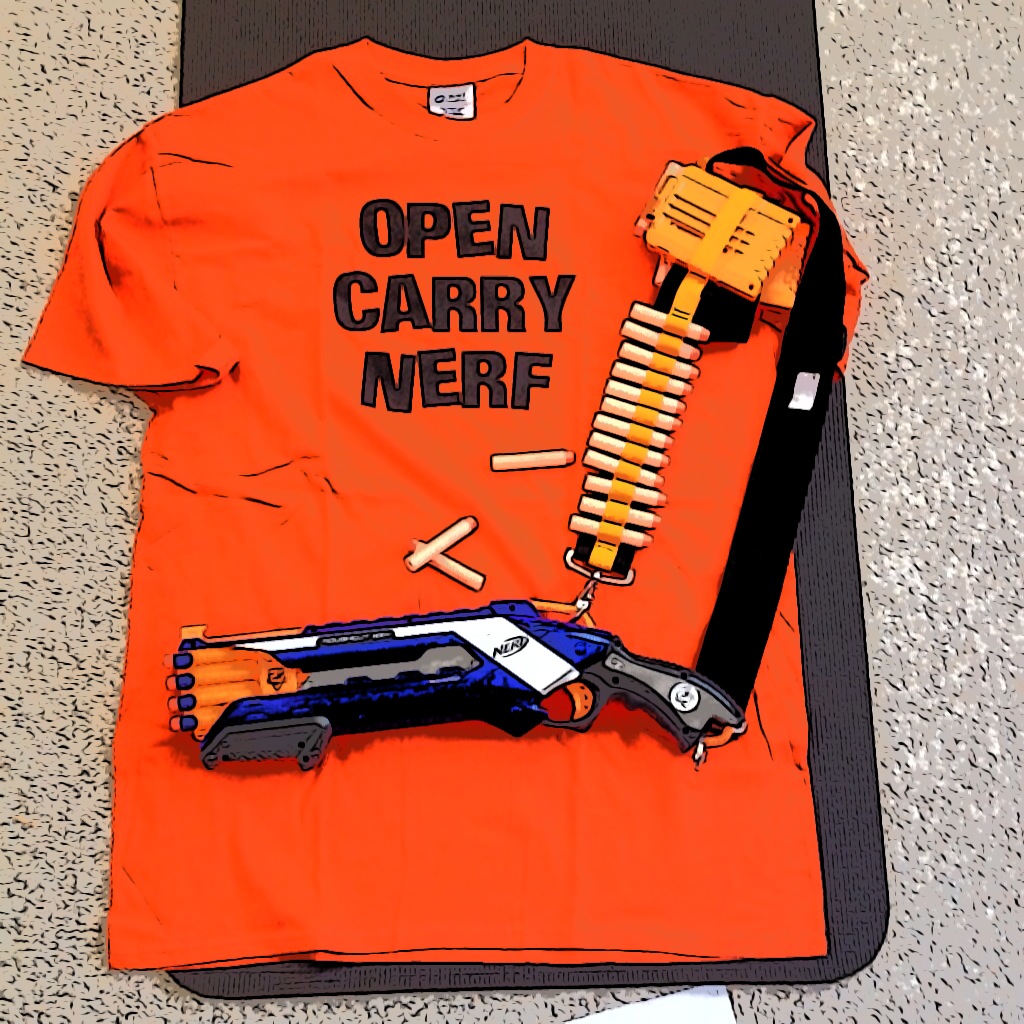 Using my First Amendment to look like an idiot in public.

“And so it begins.” Gandalf, The Lord of the Rings.

Today I launched my movement of one: Operation Open Carry Nerf. What is OOCN? It is me, a bright orange T-shirt, and my loyal Nerf gun protecting the community from evil doers. You can see my Not so FAQs if you are interested in the philosophy behind this movement of one, but since you probably ended up here by accident, I will get to today’s action.

My first visit was to Costco. Why Costco? Because I have seen other gentlemen Open Carrying there and since those guys thought it must be a dangerous location, I decided to do my part to regulate.

I prepared for today’s visit by getting into my superhero costume and grabbing my Nerf gun. If I was going to pick up those needed cherry tomatoes then I wanted to be safe in the process.

I parked far enough away so that people would not become alarmed when they saw a tall dork in a bright orange shirt approaching with a Nerf gun and a bandolier holding extra Nerf arrows.

When I arrived at the entrance it was already clear that people felt safe around me. Most people looked at me and then made an effort to make sure that I was unable to make eye contact with them. I will admit, I felt powerful and intimidating as people scurried away from me. I guess they didn’t know that I was there to protect them. I can understand their reaction, when I see a strange person with a gun my initial reaction is to flee, but once they saw that I was there to protect them (and they were out of range of my Nerf gun) they went about their business.

I showed my membership card to the employee standing by the entryway and was asked, “What is that?”

I told the truth, I’m not here to hide anything, “It is my Nerf gun,” I said as I strolled into the vast warehouse pushing my shopping cart. One of the first rules of OOCN is that you must act like what you are doing is perfectly normal. Am I carrying a child’s toy while wearing an orange T-shirt that reads Open Carry Nerf? Yes, and what is wrong with that? It’s not like I am doing something really crazy like carrying a loaded weapon in a store to buy bulk Cheerios.

I helped my assistant/photographer pick out a nice pair of black pants from the piles and noticed that this trip to Costco was different than most of my visits. I was able to navigate the aisles without anyone getting in my way. Usually I have to wait for other shoppers to get out of the way. This time no one blocked the aisles with their cart while stuffing samples of Kirkland Honey Mustard dressing and deep fried dinosaur shaped chicken chunks in their mouths. I was beginning to understand why someone would want to carry a gun with them wherever they go; it saves time.

I picked up the remaining items and started to feel a little paranoid. Everyone avoided me. I was alone in an indifferent universe.* Employees would see me and then scoot away. Was this their normal behavior, or was it because they saw my Nerf gun? Did having a powerful weapon make me see the world differently? Was I drunk with power? Would someone try to stop me?  I began wondering if the management was going to be waiting for me by the cash registers so they could revoke my membership on some shaky grounds like insanity. Did Costco have a mirrored room where they took shop-lifters and crazy people? (I doubt it because there is no way you can fit anything Costco-sized in your pants to shop-lift, and the one time I saw someone arrested in Costco it was done under the fluorescent glow of the overhead lamps.)

I approached the check-out station and unloaded my cart. The workers were friendly, but they did not give me eye-contact or ask if I found everything I was looking for. In other words, I think they just wanted me to go away fast. I paid and made my way out of the store. At Costco you must hand your receipt to someone as you exit so they can see if you have all of your stuff and to see if you are try to steal something. The employee at the door took my receipt and then asked, “What is that?”

“It is my Nerf gun. I carry it for protection.”

“You big baby,” the employee said after handing me my receipt.

I wasn’t sure how to take the “big baby” comment. Was it a comment indicating that I needed a real gun to get any respect in Costco? Or, was it a comment about people carrying guns in general? I guess it doesn’t matter because Costco was safe for the time being and I had done my part.

I left Costco feeling like I had done something…something absurd, something moronic, something that made me the center of attention, something slightly insane, something like carrying a real gun in public.

*Sentence paraphrased from The Stranger, by Albert Camus.