Canada: The only country with a leaf on its flag. It’s tricks like this that make me think Canada is up to something.

If I could sum up Canadians in one word it would not be polite, it would be sneaky. That’s right, I wrote it: sneaky. I don’t mean sneaky like China trying to sell toys painted with a combination of poison and lead, but sneaky like having a toll bridge with no toll booth.

I know, that doesn’t make any sense. A toll bridge always has a toll booth; not in Canada. On the outskirts of Vancouver (BC, not to be confused by the one in WA which shouldn’t be a problem unless you are really lost) there is a sneaky toll bridge. It isn’t like the Canadians are trying to catch you off guard, there are a trillion signs leading up to the bridge announcing: Last Exit Before Toll Bridge, Toll Bridge Ahead, Now Approaching Toll Bridge, You Are On A Toll Bridge, You Just Crossed A Toll Bridge, I Hope You Brought a Computer So You Can Figure Out How To Pay Your Toll, BIG BROTHER IS WATCHING. 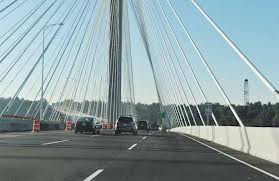 For ten miles after crossing the bridge (16 kilometers for those of you who bought into the whole “the metric system is the future” thing) I kept looking for a toll booth. There wasn’t one, but there was a sign with a web address. Had I known that there was going to be a sign with a web address I might have been able to write the address down, but I wasn’t prepared because I was trying to see if the downtown area of Vancouver was visible from the bridge. I did this by ignoring the lines on the road and turning around in my seat to look over my shoulder. “Yep, you can see Vancouver,” I said to my family who were watching the road for me so they would be able to file the police report when I crashed the car.  Then, just as I began to think that maybe there wasn’t a toll after all there was an ominous sign that stated, “Pay Your Toll Within 7 Days For The Best Price,” or something like that. That is Canadian code language for pay or you will get a fine for a “licence plate processing fee.”  How did they have my licence/license plate? Those sneaky Canadians got it when I crossed the border, I remembered the border agent walking to the front of my car and writing down my plate. At the time, I wondered if something came up on the computer when I handed over my passport, “KNOWN TO PARK IN CARPOOL PARKING SPACES, WRITE DOWN HIS LICENCE/LICENSE PLATE.”

They also got it because the new bridge has cameras taking pictures of the license plates of all the vehicles crossing the bridge. Pretty sneaky, Canada, pretty sneaky. (Canada loves their hidden cameras.)

How do I know all of this? Well, because some enterprising Americans invented Google. (Okay, one of the guys was from Russia, but the other guy was from Michigan.)  So when I got to my hotel in Whistler I typed into Google: “Toll Bridge Vancouver BC” and this is what I found: https://www.treo.ca/the-bridge/

This was the moment that I realized I would not be getting a free drive across the Port Mann Bridge. They had me. I crossed the bridge. I saw the signs. I would be recrossing the bridge on the way home. There was no way to avoid paying. I paid the toll, but it didn’t feel right. Computers, cameras and the interwebs have made it easier for us to  those daily tasks, but what have we lost? We have lost terrible jobs like Toll Booth Collector. Imagine how mind numbing that job must be. We have lost the traffic congestion caused by people who don’t have exact change. We have lost the challenge of picking the quickest line of cars when approaching the toll booths. Okay, we haven’t lost that much, but I did have to give my credit card number to Canada to pay for my $6 (Canadian) toll, which will probably end up being $20 after all the overseas charges and exchange rate maneuvering my bank goes through for me spending my money in another country.

Why couldn’t Canada just put a booth on the road like the rest of the world? That’s just not Canada’s style. Canada enjoys its reputation of producing maple syrup, hockey players, and Ouija boards. (I made up the Ouija board thing, but it is better than saying Justin Bieber.) Their reputation has allowed them to quietly infiltrate the entertainment industry in the United States. Of course everyone knows about John Candy, Mike Myers, and Martin Short, but do you realize that William Shatner is Canadian? How about Ryan Gosling? Lorne Greene? (The name Lorne should have given him away, but riding those horses with Hoss and Little John made him seem more American.) Tommy Chong? For every Howie Mandel there are three Raymond Burrs (Canadian). You don’t see Malcolm Gladwell walking around singing, “Oh, Canada” but he sure knows the words. So did Peter Jennings and Guy Lombardo. That’s right, Canadians have been sneaking across the border for years and taking American jobs. Where is the outrage? There isn’t any outrage because Canadians have built up years of trust with us. They are the polite nation. The nation that produces maple syrup. They aren’t the job stealing nation, I’m not going to mention any names here but Florida knows who I’m talking about.

Should we care? I don’t know. Should I care when I go into a McDonald’s in Canada and they serve poutine? Does it matter that Canada has a sneaky little maple leaf in the McDonald’s arch? Well, if they can corrupt McDonald’s with their little red leaf where will they stop? One step closer to Socialism taking over the planet.  (Photo credit: Wikipedia)

Maybe it isn’t such a bad thing. Maybe Americans can become more polite. Maybe we can say, “Sorry” before we say, “What’s your problem?” Maybe we can learn to wear sweaters in the winter. I can probably learn what a blue line is in hockey. I can probably learn to like Nickleback. (See, I just wrote that sentence and didn’t throw up on my computer.) I can probably understand that universal health coverage is better than paying $700 a month for insurance that only works when I don’t need it. I can probably be Canadian. I’ll make you a deal Canada, I will learn your sneaky ways if you don’t tell Texas, and if you put up one toll booth on the Port Mann Bridge.