I have never been to an Opera. I have never really wanted to go to the Opera because you have to dress up a lot more than I want to, and I really don’t know enough about the operas to enjoy them, but when I found out that I could attend an opera for free in Vienna I thought it might be time to give the grand old opera a try.

The big, big screen at the Vienna town hall.

The opera I attended was by Verdi. Now I don’t know much about Verdi, but I do know that I have some of his stuff on my iPod for when I want music that is old and famous, it makes me seem a little more cultured than I am and I can pretend that I know something about Verdi by saying, “Verdi, ah yes, Verdi. I was listening to a Verdi aria today on my iPod.” I don’t even know if Verdi wrote arias, because the definition of an aria is unclear to me, but Verdi probably did and most people won’t call you on it if you sound confident. They might be thinking, “Did Verdi write an aria? I can’t think of one, but I don’t want to sound stupid, so I won’t ask.”

I figured at some point during the opera there would be an “aha” moment when I recognized the song and would be able to hum along with the crowd in that knowing way. This has happened to me at a couple of musicals I attended. One moment I watching the play and then next thing I know they are singing a song that I kind of know, and my brain goes, “Hey, this is that song I know. I can now mouth the words and act like I knew this song was in this musical.”

Vienna does this “bring culture to the masses” thing every night in July. It really is pretty cool. Seventeen restaurants have semi-permanent booths set up to serve food on real dishes with real silverware and drinks are served in real glasses, so it is pretty classy. They then have some concert or opera on a huge screen that is hanging from the neck of the town hall.

I heard this was a classy gathering so I wanted to make sure I made a good impression, so after a long day of roaming the streets of Vienna I went back to my hotel took a shower and put on pants, a button up shirt and shoes. I didn’t want to be the guy standing there dressed like a slob, I wasn’t but apparently the “let’s dress up” memo did not get to everyone attending the opera.  I suppose it is better to be overdressed for most occasions than underdressed, unless of course you are overdressed to participate in a sporting event. Wingtips don’t always provide the traction needed in a game of pick-up basketball, but most often it is better to be the best dressed as opposed to the worst dressed.

This is the outfit I wanted to wear, not the dress, the shorts and sandals.

If your shirt and your hat match and your name isn’t Duchess, it is time to change your hat.

These silk pants come from the David Carradine collection. Black socks are not always a no-no.

The challenge for Vienna is that there are a lot of people like me: Opera neophytes. So the vibe is more like a bar than an opera house, and I suppose this is why the Viennese come out to see Verdi on the big screen. This is one of those perfect culture traps that probably gets people into opera, but it is also one of those things that drives real opera fans crazy because there is a lot of noise in the crowd since everyone is drinking and eating well past dark.

Chicken and noodles: 7 Euros, not too bad.

The food booths are good and reasonably priced, but here are some tips for you noobs out there. 1. Never get a pretzel as big as your head. It seems like a good idea, but it isn’t. There isn’t anything more cliché than a guy walking around with a jumbo sized pretzel in one hand and a large beer in the other. It is like a little kid with a balloon and a oversized lollipop. 2. Eating standing up is okay, but sitting down is much better. 3. Everyone speaks English so don’t worry about limiting yourself to stuff that looks easy to order. 4. People in Europe eat much later than we do in North America, so try to eat around 8 PM. This might mean that you have to have a snack, but eating at 6 when everyone else is just arriving is a bit sad and then you will have to waste two hours waiting for the sun to go down and the opera to start.

Large cheese pretzel…maybe not such a good idea.

On to the opera. At 9:30 this little lady came out to speak to the crowd, she was little because she was a long way from me and standing in front of a huge screen, so it was probably an optical illusion, but she might have been smaller than average. She spoke in German for a long time, about five minutes of German and then she did about 20 seconds of English. German and English are not that much different, so I knew I was losing something in the translation, but I found out the opera was named “Simon Bocanegro” which kind of, sort of rang a bell in my head. I was thinking that I might know some of the music, but then I realized that the reason the name range a bell was because there was some sports guy I knew named Carlos Bocanegro. I could not remember what sport Carlos played, so for 10 of the 20 seconds of the English translation I was trying to figure out what sport Carlos Bocanegro played. When I moved out of my brain and back into the real world I had missed most of what she said because she was now speaking Italian, I think. I went back to trying to figure out the Carlos/Simon Bocanegro problem and then finally resolved to look it up on the internet when I got back to my hotel, but my little brain still would not let it go so I distracted it by translating Bocanegro into English. Boca= Mouth, Negro= Black. Black mouth, hmmm, the opera is probably about some dental problems? or possibly it is more metaphoric and means that there is a character that has difficulty with swearing?

Let’s get ready for some opera!

The big star of the opera was Placido Domingo, I think. I don’t really know who the star of the show was because after eight minutes I couldn’t tell what was going on.

Here are the problems I had with the production: It was in Italian, I have enough trouble figuring out English lyrics. Everything I know about the Italian language can be boiled down to watching Life is Beautiful a bunch of times.
Everyone was dressed the same. The two main guys had the same hair cut, were about the same size, and could have been twins.

So here is what happened in Simon Bocanegro: Sailors pulled some ropes, eventually one guy started singing loudly in bursts, there was some kind of confrontation between the twins guys, one of the guys draws a sword and they sing, the other dude bows down. Assumptions I am making at this point: One of these guys is named Simon. One of them is Placido Domingo. Some of this will start to make sense soon.
Then a body wrapped in a shroud gets dragged onto the stage, things are looking up. I might like Opera. This scene is never resolved in the first 45 minutes of the opera, which is apparently the attention span I have for an opera that I don’t understand. The guys sing about the dead person, I assume, I really don’t know if they were singing about the price of peas is Persia, and then the curtain closes. The crowd claps politely, and I wonder if now is a good time to leave my first opera.
The scene changes to some lady singing to another lady who NEVER sings. (Again, this is an observation based on the first 45 minutes of the opera.) I found the second, non-singing role to be confusing. It is an opera, shouldn’t everyone sing? My second thought was that maybe there is a chance for me to get into opera since I could sit there and not sing. Singing lady number one finished her little bursts of song, and  I assume that one of the guys from the first scene will show up and a love interest will be sprouted. Boy am I wrong, instead of one of the signing sailors some really fat guy appears and starts singing to the lady. Are they in love? Who is this guy? What is going on? This is 45 minutes into the Opera. I have done everything I can to give the impression that I am cultured: I sat with my legs crossed at the knees. I sat forward.  I put my hands on my crossed knees. I put my hand up to my chin…none of these physical attempts at body posturing worked, so instead of pretending to understand what was going on I took a moonlit walk in Vienna and tried to remember who Carlos Bocanegro was. 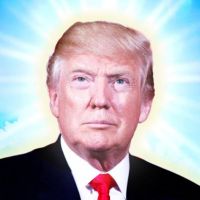